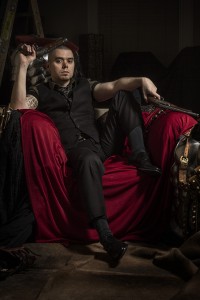 If you’ve drooled over the early concept art for Numenera, then you already know something about the brilliant artist that is Kieran Yanner. As lead artist for Numenera, Kieran is setting the stage for much of what’s to come in the Ninth World.

Recently, he agreed to sit down for an interview with Numenera editor, Shanna Germain. The two covered artistic inspiration, the visual aesthetics of gaming, and the process of world-building.

Shanna: You’re the lead artist for Numenera. What does this entail and how are you working with the team and the other artists to bring The Ninth World to life?

Kieran: I’m essentially taking Monte’s ideas and fleshing them out visually. Monte will present a concept to me and I’ll start sketching out some ideas, or if I feel confident about a specific concept I’ll run with it to an almost finished state and then present it. Sometimes this spurs tangent ideas neither of us had thought of previously. When the world is more visually developed, I’ll be switching over to doing completed illustration work. This will set the style and tone for the world.

Shanna: Are you a gamer? If so, what do you play? What games are you currently finding most intriguing?

Kieran: I am but have little time these days to game. I’m a big fan of isometric RPGs when it comes to computer games and enjoy a variety of different genres when it comes to tabletop; D&D and Rifts were always my favorite.

Shanna: Does being a gamer influence the way you create your art?

Kieran: It certainly helps. When I first started in the industry I targeted the jobs I took to sections of books I knew the audience would be flipping through the most. They also tended to be the sections I would flip through the most. This also prepped me for working in the computer games industry—I was used to developing my own world from running tabletop games. That came in very handy during the preproduction phase of game development.

Ultimately I try to analyze what the audience will like and find a balance between that and what interests me. Left to my own devices, my artwork would be more unsettling and introspective and not really related to game art.

Numenera is meeting that in a very interesting way. I have an in interest in fashion, especially haute couture. So costuming will be more fantastical, more surreal. The ultimate aim is to present something very different from what has come before in the tabletop industry.

Shanna: Is art for tabletop RPGs different than art for computer RPGs or other games? How does the art aesthetic lend itself to each type of game?

The main difference is you have to account for polygons when producing conceptual art for computer games. You may be developing for a system that cannot handle a high polygon count, which forces you to think of how you can develop a visual style that works in a more geometrically simplistic way. The environments, creatures and characters you design also have to function, they have to move, they have to swap gear and weapons. All this needs to be taken into account.

In tabletop art you can forgo a lot of that, so sometimes it’s hard for an illustrator to transition to the computer games industry. On the other side you have the issue of artwork typically needing to be completed to a higher fidelity or tighter rendering in the tabletop industry. In the computer games industry, the idea is to present a concept as quickly as possible so it can either be iterated or scrapped. So sometimes it’s tough for a concept artist to transition into an illustrator role. The current trend in illustration is leaning more toward a loose impressionistic style, which has likely been born from artists moving between the industries.

Shanna: What are your artistic influences in general? Are there any artists in particular you’re looking at for inspiration when designing art for Numenera?

Kieran: Personally, I’ve had a lot of people influence me over the years, some more so in the earlier part of my career. I’ve always had a soft spot for the TSR illustrators of the ’80s and ’90s so I think I’ll always turn to them for inspirational lift when I’m feeling stuck.

For Numenera specifically, things are still evolving, but the Art Deco and Art Nouveau periods will play a large role. Monte is also a big Moebius fan, so I’ve also looking to his sensibilities when considering the visual aesthetics. Ultimately I don’t want to rely too heavily on any one artist for inspiration; I really want to make this unique.

Shanna: Numenera is a blending of game play styles and aesthetics – a game that utilizes d20s but has a wholly new game mechanic, a world that blends science and fantasy, a tabletop RPG with a digital app. How does this blending come through in the art style? What are you doing differently with Numenera that you haven’t done with other games?

Kieran: From the get-go, I was looking to develop visuals that were neither heavily science fiction or fantasy. I feel science fiction from the earlier part of last century had a more whimsical vibe, so I’m looking to Jules Verne more so than George Lucas. This also touches back to haute couture fashion—often you can’t tell whether the person is stepping out of a science fiction or fantasy film, heading out to a BDSM club, or nabbing a cup of coffee in Soho. Otherworldly is probably the best description. Using Deco and Nouveau, I’m hoping to essentially “rein in the crazy” and solidify the visuals into a cohesive style.

Shanna: If you had to capture the essence of The Ninth World in a single image that you’ve created, which one would it be, and why?

Ahh, I’ll have to disappoint there. It would have to be in image yet to revealed. This may happen halfway through production of the core book or at the very end. It’ll likely involve a central character in a very interesting setting. I think the landscapes we’ve seen so far are evocative of the scale and drama of the setting and the concept of the monoliths would have to be the most iconic visual statement so far—but we’ve got a big story to tell and lots to come.

Shanna: What kinds of images do you have in the works for Numenera that you’re most excited about?

Kieran: For me, it’s the character exploration, which coincidentally is what I’m doing at the moment. I’m a character artist at heart so those are always gonna’ get my blood flowing.

Shanna: What else are you working on right now?

Kieran: Besides Numenera and some personal work, I’m working with Cryptozoic on a project, creating a new cover for Kobold Quarterly and doing some contract work with Microsoft. Which is why I unfortunately don’t have a lot of time to play the games I’ve helped create. We need to speed up cloning technology!